The fist number of L. refer to the standard CtP edition published in 1987. The following number shows correspondence between letters in the new 2010 edition. Note that on this website CtP is available only 1987 edition with minor additions. 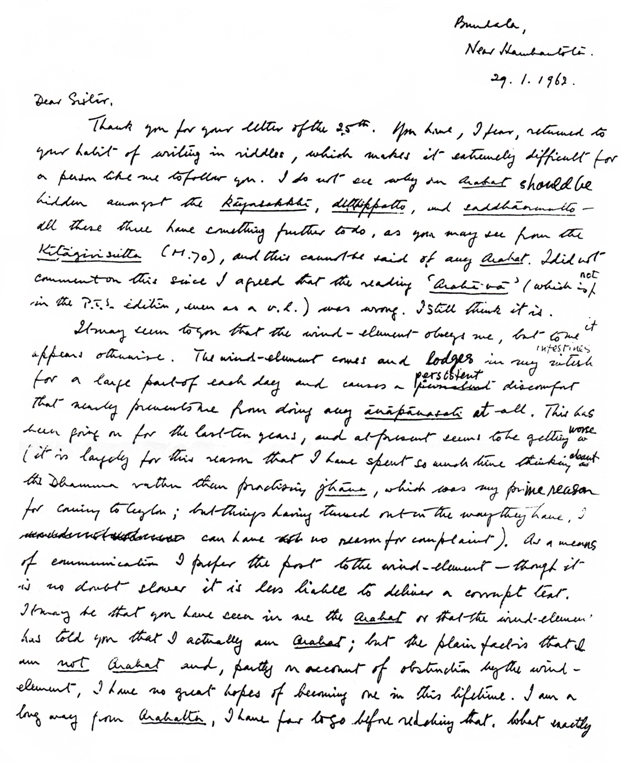 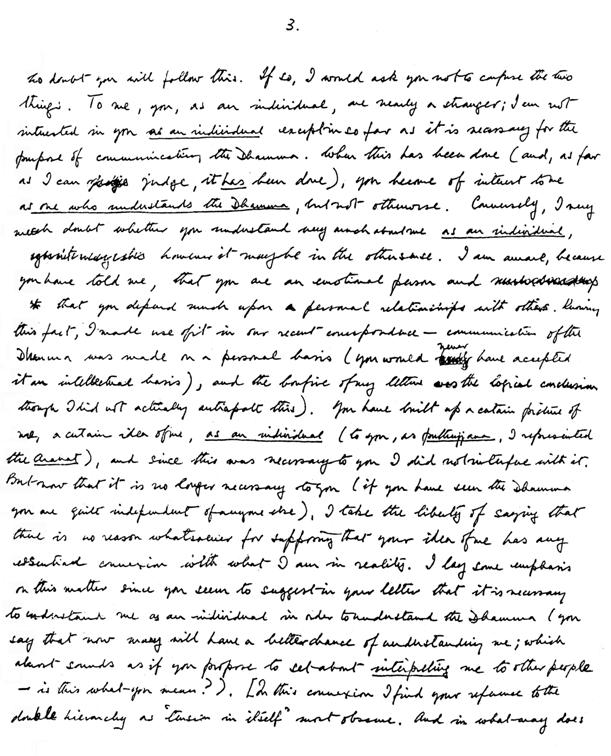 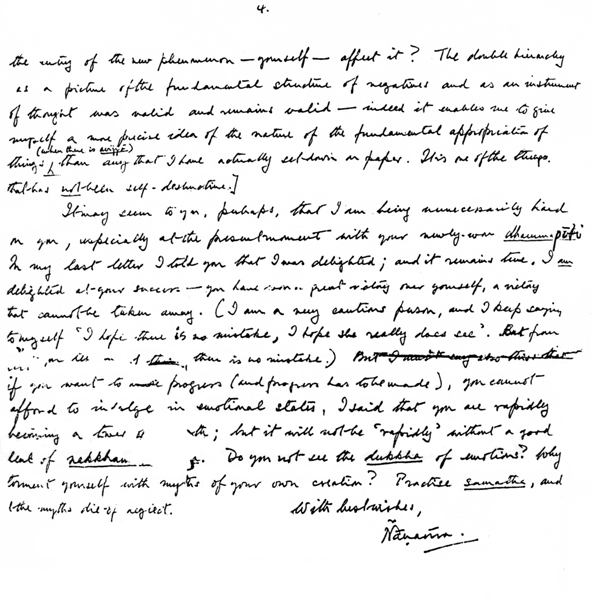 Thank you for your letter of the 25th. You have, I fear, returned to your habit of writing in riddles, which makes it extremely difficult for a person like me to follow you. I do not see why an arahat should be hidden amongst the kāyasakkhi, ditthipatto, and saddhāvimutto—all these three have something further to do, as you may see from the Kītāgiri Sutta (M. 70), and this cannot be said of any arahat. I did not comment on this since I agreed that the reading 'arahī vā' (which is not in the P.T.S. edition, even as a v.l.) was wrong. I still think it is.

It may seem to you that the wind-element obeys me, but to me it appears otherwise. The wind element comes and lodges in my intestines for a large part of each day and causes a persistent discomfort that nearly prevents me from doing any ānāpānasati at all. This has been going on for the last ten years, and at present seems to be getting worse (it is largely for this reason that I have spent so much time thinking about the Dhamma rather then practising jhāna, which was my prime reason for coming to Ceylon; but things having turned out in the way they have, I can have no reason for complaint). As a means of communication I prefer the post to the wind-element—though it is no doubt slower it is less liable to deliver a corrupt text. It may be that you have seen in me the arahat or that the wind-element has told you that I actually am arahat; but the plain fact is that I am not arahat and, partly on account of obstruction by the wind-element, I have no great hopes of becoming one in this lifetime. I am a long way from arahattā, I have far to go before reaching that. What exactly I am is a matter of no great importance, and for reasons of Vinaya, which have to be complied with, discussion of this matter is not advisable. It is obvious enough that you, with your present understanding, may arrive at certain general conclusions about what I am or am not; but that is neither here no there. In any case I must ask you, as far as possible, to keep these conclusions to yourself—it will be a considerable embarrassment to me to be talked about, and it will not serve any useful purpose.

You ask if I think that anyone ever understood me. As far as one person may understand another I have both understood, and been understood by, other people. But there are always limitations in this; however long one has known another person he can still behave in unexpected ways. No person, in the normal way, ever completely understands another. There are certain things about me that have been better understood by men and certain things that have been better understood by women, but nobody has ever completely understood me. At present it is a matter of complete indifference to me whether anybody understands me, or thinks he understands me,—as an individual, that is to say. On the other hand, it is possible that a certain person may understand and see the Buddha's Teaching, and it may happen that another person may come to see this Teaching from this first person; but when this happens it cannot properly be said that the second person understands the first person in the sense discussed above—what can properly be said is that both understand the Teaching. And anyone else who understands the Teaching (no mattter by what means) comes to join the first two; they all understand one another in so far as they all understand the same thing; but as far as understanding one another as individuals goes, they may be complete strangers. No doubt you will follow this. If so, I would ask you not to confuse the two things. To me, you, as an individual, are nearly a stranger; I am not interested in you as an individual except in so far as it is necessary for the purpose of communicating the Dhamma. When this has been done (and, as far as I can judge, it has been done), you become of interest to me as one who understands the Dhamma, but not otherwise. Conversely, I very much doubt whether you understand very much about me as an individual, however it may be in the other sense. I am aware, bacause you have told me, that you are an emotional person and that you depend much upon personal relationships with others. Knowing this fact, I made use of it in our recent correspondence—communication of the Dhamma was made on a personal basis (you would never have accepted it on an intellectual basis); and the bonfire of my letters was the logical conclusion (though I did not actually anticipate this). You have built up a certain picture me, a certain idea of me, as an individual (to you, as puthujjana, I represented the arahat), and since this was necessary to you I did not interfere with it. But now that it is no longer necessary to you (if you have seen the Dhamma you are quite independent of anyone else), I take the liberty of saying that there is no reason whatsoever for supposing that your idea of me has any essential connexion with what I am in reality. I lay some emphasis on this matter since you seem to suggest in your letter that it is necessary to understand me as an individual in order to understand the Dhamma (you say that now many will have a better chance of understanding me; which almost sounds as if you propose to set about interpreting me to other people—is this what you mean?). [In this connexion I find your reference to the double hierarchy as 'tension in itself' most obscure. And in what way does the entry of the new phenomenon—yourself—affect it? The double hierarchy as a picture of the fundamental structure of negatives and as an instrument of thought was valid and remains valid—indeed it enables me to give myself a more precise idea of the nature of the fundamental appropriation of things (when there is avijjā) then any that I have actually set down on paper. It is one of the things that has not been self-destructive).]

It may seem to you, perhaps, that I am being unnecessarily hard on you, especially at the present moment with your newly won dhammapīti. In my last letter I told you that I was delighted; and it remains true. I am delighted at your success—you have won a great victory over yourself, a victory that cannot be taken away. (I am a very cautious person, and I keep saying to myself 'I hope there is no mistake, I hope she really does see'. But from  [? illeg.]  your letter I think there is no mistake). But I must say also this: that if you want to make progress (and progress has to be made), you cannot afford to indulge in emotional states. I said that you are rapidly becoming a tower of strength; but it will not be 'rapidly' without a good deal of nekkhammasankappa. Do you not see the dukkha of emotions? Why torment yourself with myths of your own creation? Practise samatha, and let the myths die of neglect.

Editors' note:
The letter, not included in Clearing the Path (1987, Path Press), was found later in Sri Lanka.
Around in 1989 a letter has been received from a nun living in the south of Sri Lanka, a letter of Ven. Ñānavīra to nun Vajirā, the existence of which was not previously known. Before his letter arrived, she had her 'mental breakdown' and was bustled out of Sri Lanka. Apparently, the letter had remained in Vajira's kuti for some 27 years untouched – except by insects and mold – until that nun found it. The original was sent to Island Hermitage to be added to the ' 'Ñānavīra Archives'.